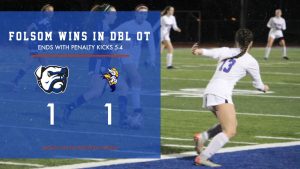 River  City scored first with 17:14 left in the 1st half. Folsom answered back with a goal just 2 1/2 minutes later also in the 1st half.  Then the rest of regulation  time ended in a 1-1 tie.

The teams proceeded to go into two 10 minute OT periods and were still tied 1-1.

Next were the penalty kicks. Both teams scored on their 1st two attempts. The Folsom goals were scored by Sophia Mattice and Reese Shephard.  Then after goalie, Emma Hofman, blocked  River City’s 3rd kick, she then switched to  offense and scored the Bulldog’s 3rd penalty kick. The score was then 3-2. Next,  River City scored and Folsom’s 4th kick was blocked, so the score was once again tied at 3-3. River City then scored again, but so did Folsom’s Lindsay Sandy bringing the score to 4-4. Goalie Emma Hofman, blocked another goal attempt from River City and then Kaylee Gillespie stepped up and scored the 5th and final goal. Folsom finished 5-4. 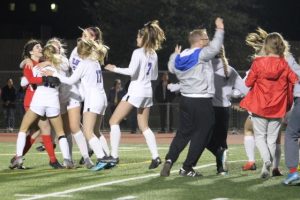 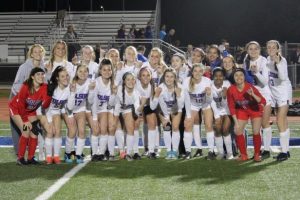 Folsom earns the win and advances to the Sac Joaquin Section Division 1 Section Finals!!! They will play Oak Ridge (#3) on Saturday, February 29, at 4:oopm at Whitney  High School.

*There may be a charge for parking.

Way to go Bulldogs!!! Best of Luck on Saturday!!! Folsom is Bulldog Proud of all of YOU!!!