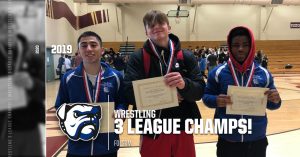 The SFL is arguably the toughest league in the entire section for all sports and wrestling is no different.  Our league tournament had over 20 state ranked competitors.  Some leagues might have 5-10 across the board, and many have less than that. 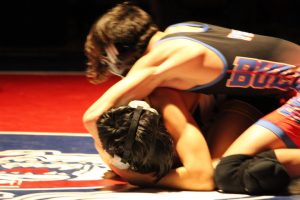 Two of those state ranked competitors belonged to Folsom.  Matt Kovalskiy (ranked #11 in CA at 220) and Julio Bautista (ranked #32 in CA at 106) showed their skill as both of Folsom’s #1 seeds dominated the competition.  Both were on the way to technical falls in the finals before finally pinning their opponents.  Folsom’s third champ on the day came in seeded second, but Toure’ Hendrick (160) looked good as he pinned his rival Mason Wilcox from Granite Bay in the semifinals and dominated his opponent from Rocklin with a major decision in the finals. 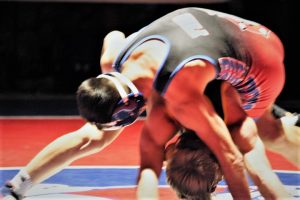 Taking third for Folsom was Caleb Frederick at 285.  The first year senior has made it to divisionals with only 3 months of wrestling experience.  Folsom had several fourth place finishes as Elias Rivera (113), Owen Benson (120), Cameron Haney (132), Josh Anderson (152), and Diogo Lucio (170) all finished in the fourth spot.  Rivera was up a weight class from his normal 106 as Bautista dropped back down for the postseason.  Owen Benson came in seeded 5th, but was able to take out the #2 seed from Whitney in consolations to advance to the third place match.  Haney was very close to being in the finals, but lost a close decision in the semifinals and then lost in double overtime for the third place match.  Anderson and Lucio were in two of the toughest weight classes and will look to improve next week.  Those weights exemplified how tough the SFL can be.  At 152, a state ranked wrestler from Rocklin barely made it through, finishing 5th. At 170, the #17 ranked wrestler in the state from Oak Ridge was upset in the semifinals and ended up beating Lucio for 3rd. 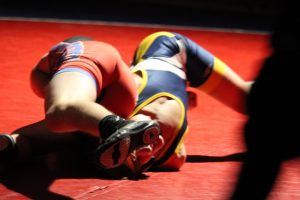 Finishing in 5th place and rounding out the qualifiers for Folsom were Charlie Milburn (126), Luke Erwin (138), Kaiou Reyes-Small (138) and Jake Greule (197).  Milburn came in seeded 6th, but beat the #3 seed twice to get in to the top 5 and qualify for next week.  Erwin pulled out a win with a takedown in overtime to secure his spot for next week.  Reyes-Small had an injury so we defaulted him down to 5th to move on to next week when he is healthier and should finish higher.  Greule is another first year wrestler who was able to qualify with limited experience like Frederick.  Our final varsity wrestler was Ben Tinoco (182) who finished 6th and will be an alternate for next week. 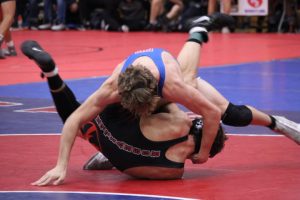 Our JV had some great results also as we had several champs and almost every competitor came back with a medal, with most finishing first or second.  Folsom was dominant in the lightweights as Kyle Hara (98), Legend Lincoln (106) Jordan Quitugua (113), Manav Joseph (126), and Israel Alfaro (132) all took first place and most did so in dominating fashion.  Finishing second for Folsom were Peyton Taylor (106), Nicholas Gargaliks (138), and Chris Sepulveda (220).  Zeke John (120) made it to the semifinals but ended up in 6th place.

So, the Bulldogs had male wrestlers in 13 of the 14 weight classes qualify for the next level, by finishing in the top 5 in their weight class. The next level is the CIF Sac Joaquin Section Divisionals. They will be held next week at Del Oro High School on February 14-15, 2020.

The Lady Bulldogs will also compete next week, but at the Northern Regionals at Natomas High School. Matches usually start at 8:00am on February 14-15, 2020.