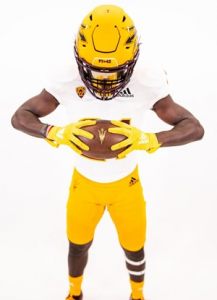 Arizona State football gets commitment from Daniyel Ngata, nation’s No. 2 all-purpose back.

The Sun Devils may have lost running back Eno Benjamin who opted to forgo his senior season and enter the NFL draft but they have addressed that with the latest signing class.

Running back Daniyel Ngata, out of Folsom High School in Northern California, announced his intention to attend ASU during the Under-Armour All-American Game at Camping World Stadium in Orlando, Fla. on Thursday.

Ngata, the No. 2 all-purpose back in the country according to 247Sports, had 24 offers from which to choose. That tally included eight from Pac-12 schools. He was also courted by other football powers such as LSU, Alabama, Michigan, Clemson and Notre Dame.

Click on the link below to read the rest of the Arizona Central news article.

Best of luck Daniyel! Folsom is Bulldog Proud of You!!!