The Folsom Bulldogs, in the past two weeks, have had two successful league games against Rocklin and Whitney High School. They continue to display their successes and show consistent growth with each game they play.

Before the big Homecoming game, the Rocklin Thunder showed improvements from the following season after defeating Oakridge 28-22. Itś no surprise that Oakridge has been a challenging opponent in the past, which rose concern that Rocklin may be a potential new and improved team. Even with that obstacle in mind, Folsom was fired up and ready to go on their home turf. Two touchdowns were scored back to back by Quarterback Jake Reithmeier, which set the tone for the entire game. 42-20 was the final score and Folsom hosted a memorable event for students as they looked forward to their Homecoming dance.

The following week, Whitney hosted the third league game of the season and the Wildcats put up a good fight. The score appeared to be stagnant in the first half but the Bulldogs picked things up in no time after the ball was handed to Daniyel Ngata. Twice in a row, Ngata rushed to the end zone and amazed students and fans especially with a 70 yard gain the second time he scored. Their league record increased when the score ended 51-24.

This 2019-20 season altogether has displayed drastic improvements among many individual players as well as the teams overall dynamic. Head Coach Paul Doherty has helped his players to excel in all areas this season, whether it was by working on needed improvements or by providing one on one coaching attention. The Bulldogs still have a lot more to show and that will only be revealed with time. The team will be on the road this week to Granite Bay High School representing their team well at 7:00pm. 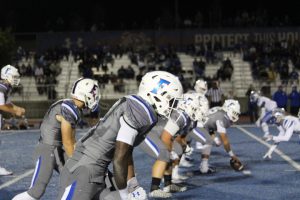