On September 20th, the Bulldogs had their first league game of the season away at Oakridge. The Trojans uphold a reputation for being a tough team in comparison to a number of the Bulldog’s other opponents. Even regarding that, none of their rankings oversee Folsom’s talent. The opposing team started the night off with a moment of silence in respect for former Freshman Head Coach, Jason Clark. After the recognition, the Bulldogs put their talent to the test when they started the game strong, scoring within minutes of the first quarter. The Bulldogs gave Oakridge every opportunity needed to defeat them, even when it came down to one final field goal. The ball was surprisingly kicked outside of the goalpost, and the outcome turned in Folsom’s favor. There is no argument that it was a close game, but according to Head Coach, Paul Doherty, the team can only control what they can control, and all they can do is work harder and improve as a team.

The Bulldogs did work on needed improvements, and displayed it well when they played Menlo-Atherton High School at their home campus the following week. Folsom showed no weakness and gave the Bears minimal chances to score. Nearing the end of the second quarter, the defensive line shifted quickly to offense when fullback, Dylan Richard, gained possession of the ball and sprinted to the end zone. The overall score was 49-0 and the Bulldog’s had great teamwork and support alongside them.

Next week, Folsom will play their second league game against Rocklin High School for the big Homecoming game! 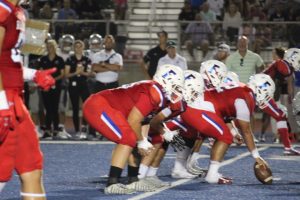