As the Folsom Bulldogs kick off the 2019 season, expectations are set high for this year’s varsity team. Questions arise if the team dynamic has shifted with the absence of former Head Coach Kris Richardson but new Head Coach Paul Doherty is more than qualified and a perfect fit for Folsom. He’s confident all players are prepared to take the State Championship once again and to not settle for anything less. The official first game of the season was held at Sacramento State last Friday where Folsom gave an accurate projection on how the season will play out. Doherty lead his team to success defeating Jesuit 52/12 which was a three-point gain in comparison to last season. He proved to the team that if they continue to work hard they will continue with the same result. This week the Bulldogs will play against Antelope High School, although all questions being asked are the big ones regarding De La Salle. The team came close this last 2018 season but faced many challenges throughout the game. The majority of fans watching were not prepared to see as many turnovers as there were along with complications on the offensive line. If anyone knows Folsom Football they know the offensive line is hard to outrun and the Spartans beat them at their own game with their well-prepared defense. While disappointment did come alongside the players after the loss, skills were gained and it’s without a doubt that Folsom is now ready to claim victory over De La Salle. On September 13’th the team will be playing on familiar ground at Folsom High School where fans and students will be cheering on their Bulldogs! 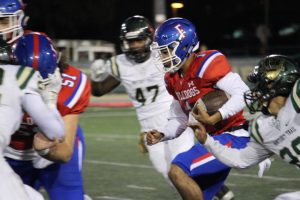